Travel Post: A Dietitian On Vacation and It All Starts in Norway! 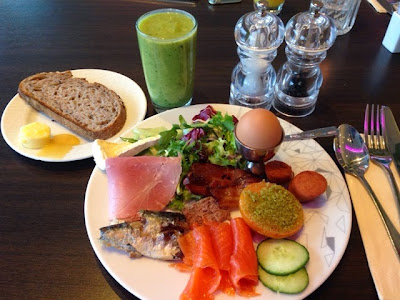 We have so much in common, you and I, we both love to eat! If not, you wouldn’t be reading this blog. Everyone deserves a break once in a while and I decided to take mine now! I am starting my 2015 Europe gastronomy adventure in Oslo, Norway where there’s still time left for you to hit the ski slopes before I begin this degustation experience.  I will now become, “A Dietitian on Vacation”, until I return home! This means, I can eat whatever I want because the energy I will burn during my travels will pretty much balance out by the amount of food I eat!

The Thon Opera Hotel was directly adjacent the central train station in Oslo and it was a convenient place to get around town. The best thing is that the buffet breakfast was included and of course, as a dietitian on vacation, I ate my heart out and almost left it at the scene with all the pickled herring, smoked salmon and smoked mackerel. It was the coldest I’ve been for a while, probably since I left the bone chilling winters of New York for the subtropical climate of Hong Kong. Thank God for central heating here! 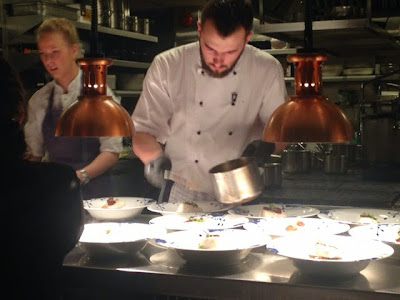 One restaurant that people recommended was Lofoten, Oslo’s own waterfront gem that has been somewhat of an institution since the early 1990’s. Lofoten is a restaurant that’s been under the same owner for over 2 decades and it is still a good place for good food. Lofoten is named after the famed Norwegian fishing islands where nature and seafood meet at its best and they definitely put fish as their star on the menu. 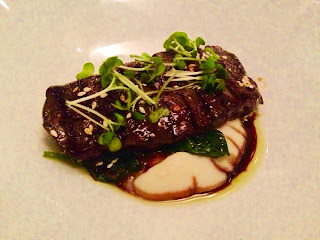 The first thing you see as you entered the restaurant is the semi-open kitchen. The chefs were very busy already when we walked inside and we immediately sat down and browsed the menu. I chose a 5 course menu as well as a bottle of local brewed beer and was hungry as a pig! First course, seared whale meat with cauliflower purée and finished with a sesame and micro greens. I know I may have offended some animal activists but I actually never had it before and I am really curious about its taste and texture! Just this once, I promise! It actually was very much like red meat with a fishy taste, I was quite intrigued.
The following course comprised of a very generous portion of red beet soup and a drizzle of cream. Simple and delicious. 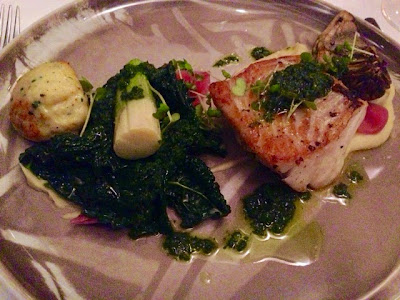 The main course was a perfectly seared piece of pollock, but the sides were not well executed, which made this dish a bit on the disappointing side. I was served the end of the asparagus, which was inedible and also the artichoke was very chewy as the inedible leaves comprised of 90% of it. We did voice it to our server, but she wasn’t of much help and apologized on the behalf of her chef. The other sides, a croquette of pollock meat, was quite tender and juicy and the fried kale was cooked well, but the whole dish was overly salted and didn’t hit the spot. 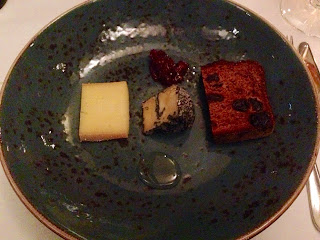 Our cheese course was pretty interesting. Norwegian cheeses of course, and both pungent. One was harder and more aged than the other and the one in the middle was rubbed with a bit of charcoal, I could taste the remnants. These cheeses were served with a tomato and chili jam along with some honey and homemade cranberry bread. That jam was pretty much the highlight of the meal and I really wanted to make some when I get back home. 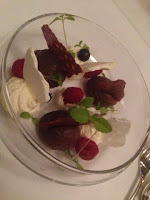 As for dessert, an elegant bowl of chocolate mouse and vanilla mouse with meringue and chocolate crisps with a few raspberries finish the meal. I would have opted for another ending, but it wasn’t my choice to make. I was very full by the end of the evening and ready for another day of sight seeing the following morning. 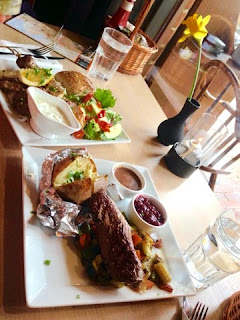 On the following day, we stumbled across a restaurant right behind the Cathedral, which was more of a café serving a decent lunch. The menu was pretty profound for such a small place but one thing that popped out was the reindeer steak! I know, you’d think Rudolph right? …I am not a cruel person! Rudolph would not have been so dumb to get caught and then be eaten by me! Anyhow, if you have ever eaten venison, it’s just like it and for those of you who haven’t, it’s like a steak with a slight gamey thought.
That’s it for Oslo now, next stop, Denmark!